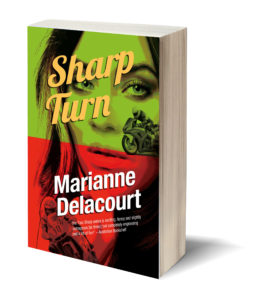 UK 12/12/16 – Award-winning author Marianne Delacourt has just unveiled the new look for her action-packed crime series Tara Sharp and a rewrite of the gripping second novel Sharp Turn. Under the crime imprint Deadlines, this version of Sharp Turn is published by Twelfth Planet Press, an advocate of women’s voices in science fiction, fantasy, horror and crime genres and a natural home for Delacourt. The re-release offers new and revised material for fans of Tara’s exploits, but retaining the humour, peril and paranormal flavour of the original release.
The latest in her series of ‘funny, sexy, smart crime novels for men and women’, Sharp Turn sees Tara’s unconventional PI business evolving, and she’s attracted some interesting customers. With her dryly humorous take on the world, Tara is expected to both charm new audiences and delight old fans this winter, as she confronts a shady job in the high octane world of the motor cycle industry. Luckily, Tara is better equipped than most, with the uncanny ability to read people’s auras. Armed with a vanilla slice and backed up by her pet galah, Tara is about to come head-to-head with some very dangerous characters.
Book One in the Tara Sharp series, Sharp Shooter was the 2010 winner of the Davitt Award for Best Crime Novel and nominated for the Ned Kelly Award 2010 Best First Crime Novel. Expect the release of Book Three Too Sharp and Book Four Sharp Edge in early 2017.
Author MARIANNE DELACOURT says, “Tara is a protagonist who really grows with her readers. To begin with, she’s an outgoing Australian girl who’s never really taken responsibility for herself. Her unusual gift puts her in some risky situations and through her tenacity and resourcefulness she comes out on top. The series shows her learning how to find a meaningful way to use her gift, while trying to maintain normal relationships with the people around her. She’s just trying to make a living, stay alive, and keep her sense of humour.”

Praise for the Tara Sharp series:

“Australia’s Marianne Delacourt delivers the laughs and action with her sassy, unorthodox PI Tara Sharp…” The Herald Sun
“Tara Sharp is a gust of fresh air in the local crime fiction scene. While it is wonderful that our more literary crime writers are finally getting the attention they deserve, there’s still plenty of room for fast-paced commercial female-oriented Australian crime fiction. And Marianne Delacourt (aka sci-fi writer Marianne de Pierres) has certainly nailed that brief.” The Australian Bookseller and Publisher

“Delacourt has invented a Stephanie Plum character who is just as ballsy and loveable but this one lives in Perth and has two pet Galahs instead of a hamster. An easy read with multiple story layers, Sharp Turn will keep you guessing till the end, pick it up this summer if you like Janet Evanovich and Val McDermid’s Blue Genes.” She Said

Author MARIANNE DELACOURT is the alter ego of award-winning, internationally published Science Fiction writer Marianne de Pierres. Renowned for dark satire in her Science Fiction, Marianne offers lighter, funnier writing under her Delacourt penname. As Delacourt, Marianne is also the author of Young Adult fiction series Night Creatures (Burn Bright, Angel Arias and Shine Light). She is a co-founder of the Vision Writers Group and ROR – wRiters on the Rise, a critiquing group for professional writers. Marianne lives in Brisbane with her husband and two galahs.

Australian Publisher TWELFTH PLANET PRESS is a Perth-based publisher, seeking to challenge the status quo with books that interrogate, commentate and inspire. While showcasing the depth and breadth of Australian fiction to a wider audience, Twelfth Planet Press aims to and provide opportunities for fiction written by female writers, raising awareness of women’s voices in science fiction, fantasy, horror and crime genres.