From the author of Unwrapped Sky, Rjurik Davidson

Dark Tides collects together the short fiction of award winning, Clarion South graduate Rjurik Davidson. Dark Tides will be available in both print and ebook.

Twelfth Planet Press is delighted to announce the acquisition of Dark Tides from Rjurik Davidson.

Dark Tides is an exciting genre-spanning collection featuring science fiction and fantasy, surrealism and magic realism. A man listens to his mysterious neighbour’s constant weeping; a future revolutionary faces terrible moral choices in the face of a surrounding enemy army; in the city of Caeli-Amur, a man visits the ghost-haunted ruins of the ancient forum; an immigrant searches for intimacy in a fascist Paris; a researcher joins an expedition to capture a Siren; a lost soul is hired to guard a corridor with six permanently closed doors—these and many more stories intrigue and sparkle, swing us from melancholy to triumph, and set our minds alight with ideas. Dark Tides is a collection that unveils the contradictions of life and turn them on an angle so that we might see them—and ourselves—more clearly.

Rjurik Davidson is a freelance writer. He has written short stories, essays, reviews and screenplays. His first collection, The Library of Forgotten Books, was published by PS Publishing in 2010. His 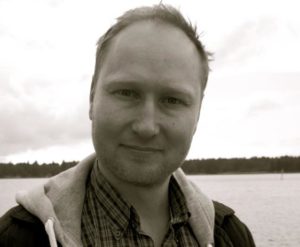 novel, Unwrapped Sky, was published by Tor Books in April 2014. Sci Fi Now claims it can “go toe-to-toe with China Miéville’s best.” Kirkus Reviews calls it “Impressively imagined and densely detailed.” Newtown Review of Books says it’s “one volume you cannot ignore.” His novel, The Stars Askew will be out in 2016 and his screenplay The Uncertainty Principle (co-written with Ben Chessell) is currently in development.

Rjurik can be found at www.rjurik.com and tweets as @rjurikdavidson.