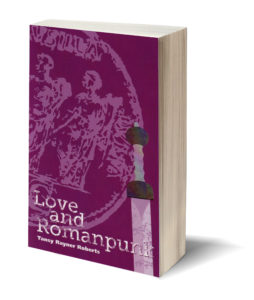 The most recent story I’ve been serialising on my fiction podcast, Sheep Might Fly, is “Julia Agrippina’s Secret Family Bestiary,” from Love and Romanpunk.

It’s been fun revisiting this story, which is packed full of so many of my favourite historical characters and mythical monsters – and was directly inspired by my doctoral thesis, on the public image of Roman imperial women.

When Amanda Rainey, the cover designer at Twelfth Planet Press, asked me for an example of a Roman coin to use as a “texture” on the Love and Romanpunk cover, I knew exactly which design we had to use. Caligula commissioned a series of coins featuring his three sisters: Julia Livilla, Julia Drusilla and Julia Agrippina – standing side by side like goddesses or, to a modern eye, a lot like Charlie’s Angels. It was this coin design that inspired me to write a series of stories reimagining the Julias of the first imperial family of Rome as an elite force of monster-hunting warriors and/or superheroes.

Seriously, the Julio-Claudian dynasty makes so much sense if you accept that most of them were vampires and/or werewolves.

One of the things I am enjoying most about my new podcast is that I can publish original works that are completely indulgent and amusing… but I also really like being able to bring a new lease of life to some of my older stories, curating them for a new audience. Reading bedtime stories is one of the many skills I’ve been honing over the last decade of motherhood, why not put them to good use?

I forgot how much I loved this version of Agrippina – how raw she is, and angry about her place in history – how calculating and chilling she becomes as her story unfolds in alphabetical order, based on the monsters she and her family have faced.

Another Love and Romanpunk story was podcast in March – “Lamia Victoriana,” which was inspired by the life of Fanny Wollstonecraft, Mary Shelley’s lesser known sister. Otherwise known as my Byronic lesbian vampire story, this one takes almost as many liberties with history as “Agrippina” does, and was reprinted at Glittership, an LGBTQ SF & Fantasy podcast.

The first two episodes of “Julia Agrippina’s Secret Family Bestiary” are available to listen for free from Sheep Might Fly:

The podcast is updated weekly on Sunday nights. This serial will run for six episodes. You can follow Sheep Might Fly on Twitter (@sheepmightfly) or Tumblr (http://sheepmightfly.tumblr.com/)