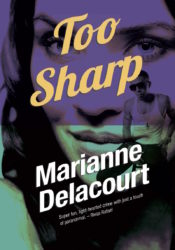 .
Tara Sharp’s new case brings her to Brisbane, where she is placed in charge of Slim Sledge, a high-maintenance rock star. Tara’s a sucker for a backstage pass, and it'll provide some much-needed distance between herself and her mother's not-so-subtle hints about getting a “real” job, not to mention crime lord Johnny Viaspa, the only man on the planet who wants her dead.
.
She expected the music industry to be cut-throat, but Tara soon uncovers more problems than just Slim Sledge's demands and his rabid fans. Everywhere she turns, the grudges run deeper and the danger ramps up.
.
Has Tara finally pushed her luck too far?
.

Marianne Delacourt is the pseudonym of a successful, award winning Australian sci-fi fantasy author who is sold throughout the world. Sharp Shooter is set in Perth, where the author grew up. The next book in the Tara Sharp series is Sharp Turn. Marianne now lives in Brisbane with her husband and two galahs.