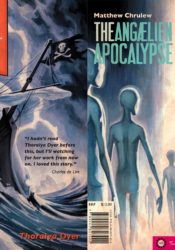 The Company Articles of Edward Teach

Learning to live inside your own skin is hard enough, but what if you were thrown back in time, to another body; a different world…?

I was dead and now I’m alive, a stolen soul from a different world, but there seems to be another mind sharing the body with me and I really don’t want to go mad.

The body of Blackbeard the pirate surfaces beside me, bleeding, and I want to laugh. I’ve been sent back three centuries. The clash between my two sets of memories makes me want to throw up. All the safety I took for granted is gone.

Reports had come in as the revolution erupted: a myriad of rotating discs approached Earth at speed. Panic and joy spread around the planet in viral waves. Few needed any help to identify these flying objects. They were the angælic vehicles.

And at the helm of the lead saucer was the Man himself. Jesus Christ.

I loved the idea of having that juxtaposition between Islam and Judaism. At the orthodox end of the scale, both are restrictive and patriarchal faiths and both have a tendency to push their children down a certain prescribed path. I was really interested to see how this played out in the novella. … Sentence to sentence, Thoraiya’s prose has spark and depth.

In some ways, this is a deeply cynical novella in what it has to say about faith. But in other ways, in the way it explores the idea of friendship and love, it provides a very hopeful message, without ever being mawkish. … Matthew is absolutely firing on all his writerly cylinders with this novella. The plot is insane, some of the images are really fucking disturbing and the ending… well the ending had me laughing out loud.

Learning to live inside your own skin is hard enough, but what if you were thrown back in time, to another body; a different world…? AND An alien story you’ve never seen before …