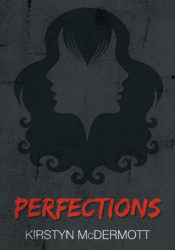 Not all fairytales are for children.

Antoinette and Jacqueline have little in common beyond a mutual antipathy for their paranoid, domineering mother, a bond which has united them since childhood. In the aftermath of a savage betrayal, Antoinette lands on her sister’s doorstep bearing a suitcase and a broken heart. But Jacqueline, the ambitious would-be manager of a trendy Melbourne art gallery, has her own problems – chasing down a delinquent painter in the sweltering heat of a Brisbane summer. Abandoned, armed with a bottle of vodka and her own grief-spun desires, Antoinette weaves a dark and desperate magic that can never, ever be undone.

Their lives swiftly unravelling, the two sisters find themselves drawn into a tangle of lies, manipulations and the most terrible of family secrets.

The Aurealis and Australian Shadows award-winning novel by the author of Madigan Mine and Caution: Contains Small Parts.

“Perfections sings from the page. It is dark, compelling and monstrously beautiful.” Alison Goodman, New York Times bestselling author of Eon and Eona.

“Kirstyn McDermott’s prose is darkly magical, insidious and insistent. Once her words get under your skin, they are there to stay.” Angela Slatter, British Fantasy Award-winning author of Sourdough and Other Stories.

“Perfections is a sharp, creepy and deeply discomfiting novel full of awkward truths and raw emotions.” Tansy Rayner Roberts, author of the Creature Court Trilogy and Love and Romanpunk.

"McDermott has expertly weaved character, psychology, and dialogue to create a creepy, suspenseful story that will slip under your skin." Aurealis magazine

Kirstyn McDermott has been working in the darker alleyways of speculative fiction for much of her career, with many critically acclaimed and award-winning short stories under her authorial belt. Her debut novel, Madigan Mine, was published in 2010 and won the Aurealis Award for Best Horror Novel, while her newest book, Perfections, was released late in 2012. While wearing her non-writing hats, Kirstyn co-edited the inaugural issue of Midnight Echo, served as Vice President of the Australian Horror Writers Association, and convened Continuum 3, the speculative fiction and pop culture convention. These days, when not wearing her writing hat, she produces and co-hosts a monthly literary discussion podcast, The Writer and the Critic, which generally keeps her out of trouble. After many years based in Melbourne, Kirstyn now lives in Ballarat with her husband and fellow scribbler, Jason Nahrung. She can be found online (usually far too often) at www.kirstynmcdermott.com

Two sisters. One wish. Unimaginable consequences. Not all fairytales are for children.