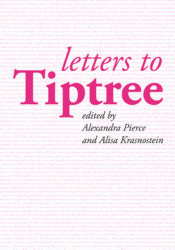 In celebration of the 100th anniversary of Alice Sheldon’s birth, and in recognition of the enormous influence of both Tiptree and Sheldon on the field, Twelfth Planet Press is publishing a selection of thoughtful letters written by science fiction and fantasy’s writers, editors, critics and fans to celebrate her, to recognise her work, and maybe in some cases to finish conversations set aside nearly thirty years ago.

And bonus reprint material including:

Winner of the Locus Award for Non-Fiction

Winner of the British Fantasy Award for Non-Fiction

Winner of the Alfie Award

Winner of the Aurealis Convenors' Award for Excellence

Winner of the William Atheling Jr Award for Criticism or Review

Reviews for Letters to Tiptree

From Subversive Reader: "I can’t imagine a better tribute to such an interesting author."

From Nicholas, From the Heart of Europe: "When I read books about sf, I want i) a better understanding of stuff I have already read and ii) suggestions of stuff I might read in the future which may appeal to me. I got both from this book."

From Tsana, at Tsana Reads: "My favourite part of this latter material was definitely the letters between Tiptree and her contemporaries. I would love to read more of them. The focus here was on Tiptree revealing her Alice Sheldon identity to her epistolary friends but I'm sure there were many other interesting conversations for us to snoop on from the future. ... if you have even a passing interest in [Sheldon's] life or fiction, this makes for an interesting read."

From Deanne Sheldon-Collins, in Aurealis #85: "A combination of personal and critical stories exploring a genre that resists definition yet often limits itself, Letters is an important book about science fiction - past, present, and future."

From Electra Pritchett, at Strange Horizons: "Letters to Tiptree introduces a whole varied cast of people from around the world whose viewpoints, so personally expressed, are that much more interesting, and whose works, judging from these letters, are themselves well worth seeking out. Many of them are women, proving once again that the notion that there is only one woman science fiction writer of significance at any time is bunkum, and many of them aren’t, proving that—contrary to what many of Tiptree's female admirers in the 1970s feared—one doesn’t have to be female to Get It. In this way, fifty years later, Letters to Tiptree also demonstrates that Tiptree was unique in the annals of science fiction, and why: a product of her time in every complicated way, the impact of Tiptree's unmasking was so profound because her work was so good and because it came at a time when all the old categories were already coming into question, and because it demonstrated precisely how unstable those categories already were."

Alexandra Pierce reads, teaches, blogs, podcasts, cooks, knits, runs, eats, sleeps, and observes the stars. Not necessarily in that order of priority. She is a Christian, a feminist, and an Australian. She can be found at her website, and on the Hugo-winning Galactic Suburbia podcast.

Alisa Krasnostein has been successfully editing and publishing books for eight years. In 2011, she won the World Fantasy Award for her work with the press, and Twelfth Planet books and stories have won the Shirley Jackson, WSFA Small Press, Aurealis, Ditmar, Chronos and Tin Duck awards. Alisa is also a four times Hugo nominee, and winner of the Peter McNamara Award in 2011, as co-host of the Hugo winning Galactic Suburbia Podcast. Twelfth Planet Press has championed underrepresented voices from the very start. Previous projects include the acclaimed Twelve Planets series of twelve short collections of short fiction by Australian women and Kaleidoscope, an anthology of diverse YA fiction, published in 2014.

Pricing includes postage. Postage for "Elsewhere" in the world is an estimated upper cost and excess postage will be refunded as soon as correct postage is priced.