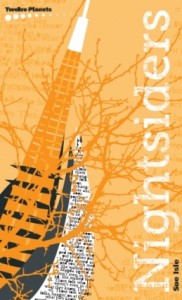 In a future world of extreme climate change, Perth, Western Australia’s capital city, has been abandoned. Most people were evacuated to the East by the late ’30s and organised infrastructure and services have gone.

A few thousand obstinate and independent souls cling to the city and to the southern towns. Living mostly by night to endure the fierce temperatures, they are creating a new culture in defiance of official expectations. A teenage girl stolen from her family as a child; a troupe of street actors who affect their new culture with memories of the old; a boy born into the wrong body; and a teacher who is pushed into the role of guide tell the story of The Nightside.

Nightsiders will be released in March 2011.