Above by Stephanie Campisi and

Below by Ben Peek 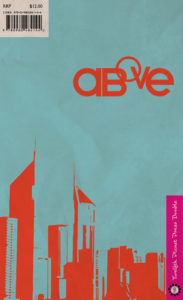 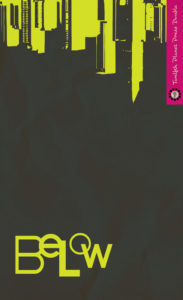 A city has fallen from the sky.

In the wreckage, two men – Devian Lell, a window cleaner in the floating cities of Loft, and Eli Kurran, a security guard in one of the polluted, ground-based cities of Dirt – will find their lives changed.

Devian, who has done what few in the floating landscape have by stepping outside the sanctuary of his home, will be drawn into the politics of Loft, as he is recruited to be the assistant for Dirt’s political representative. On the ground, Kurran, still mourning the death of his wife, tries to remove himself from the violent politics of Dirt even as he is blackmailed into providing security for the diplomatic representative of Loft, a woman three times his age, and the oldest living person he has ever met.

A tale of two cities, the stories Above and Below make up two halves of another in the TPP Doubles series. Written by Stephanie Campisi and Ben Peek, designed to be self-contained and complete as individual narratives, the two parts can be read in either order, yet also form a single narrative that has been intricately woven and designed to create a single, novel length story. It is a work that suggests not a single way of reading, but rather two, with conflicting morals that will continue to test the reader’s certainty in who, in the cities of Loft and Dirt, is in the right.

Campisi’s “Above” tells the story of a diplomat sent from Dirt to prevent a war from the point of view of his uncomfortable host, while Peek’s “Below” has the rather more action-packed storyline of a native of Dirt dealing with the threat from the sky. Both stories reflect each other in multiple ways: the protagonists are broken men, dealing with dead/dying wives, and apparently unsuited to play host to diplomats. Both are surprised by what they learn of the ‘other’ world. Both are men with very little to lose, and a disassociation from their own culture. Above/Below does not provide nearly as many answers to the narrative questions raised with in the text as a reader might like, but both stories are cleverly and at times beautifully written, and the whole is worth far more than the sum of its parts.

– Not if You Were the Last Short Story on Earth

It’s not everyday after all that we come across a book like The Griffin and Sabine trilogy or City of Saints and Madmen: The Book of Ambergris in which the medium or the storytelling technique changes everything. Above/Below is one such book and I say that not just because of the format but due to the quality of the writing as well. While short and immediate, one could spend a long time analyzing the book, poring over the details, debating the politics of the setting, and analyzing the nuances of Campisi and Peek’s technique. They’re compelling novelettes in their own right but together, a must-read novel for any reader–genre or otherwise–and is easily one of my favorites for 2011.