Meet the world of New Ceres, an exciting and dangerous place. Its water is green and its inhabitants are sophisticates.

New Ceres is precarious: its New Enlightenment constrains society as well as liberating old thoughts and literature and drinking customs. The planet plays interstellar politics to defend its independence and it recruits refugees from Old Earth and the conquered New Alliance planets to maintain some dangerous habits.

On New Ceres you will find coffee houses and highwaymen, drinks, gambling and illegal hi-technology.

New Ceres posits a future world that has chosen to embrace the Age of Enlightenment, and remains entrenched in 18th Century culture and technology almost two hundred years after its foundation. New Ceres has been created as a shared writer world, where characters and themes created may be extended, touched on and elaborated by future authors. 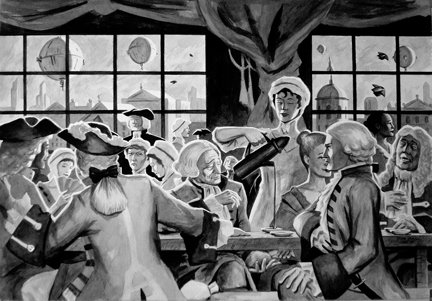 Read issue #1 of the webzine for free

“Mist and Murder“ by Lucy Sussex

It began with a difference of opinion, between myself and my employer Madame la Duchesse Claudine Recherche Dubois. “Ghosts and murders! Pepin, they do not mix.”

“Tower to the Sun“ by Jay Lake

“We’ve built a tower to be closer to the sun,” said Brother Linnaeus.The other three golden monks attending him at his bedside in the votarium murmured their assent. Brother Linnaeus rather wished they wouldn’t do that so much, but his temper had been…impetuous…in his younger days. We all have our sins, he thought. How else would we earn forgiveness?

“Let me guess,” said Madame Genevieve, quietly enough that no-one else in the salon would hear. “You’re here about the Thunderbird, aren’t you?”

“The Bride Price“ by Cat Sparks

The rococo splendour of the lobby did not faze Padraic, but the thought of selecting his future bride filled him with an unaccustomed nervousness. “How old did you say they are?” he asked. His companion, Dasan, also unimpressed by the finery of their surroundings, gave a slight shrug as their footsteps echoed loudly through the hall. “Not old enough,” he said.

New Ceres is also the location of the first Twelfth Planet Press novella: Angel Rising by Dirk Flinthart. Proctor George Gordon, a hidden protector of New Ceres, knows all too well how easily these can bubble over, but nothing can prepare him for interstellar warfare in his own technologically challenged backyard… (Read more)

New Ceres by Twelfth Planet Press is licensed under a Creative Commons
Attribution-Noncommercial-Share Alike 2.5 Australia License
Based on a work at ceres.dreamhosters.com