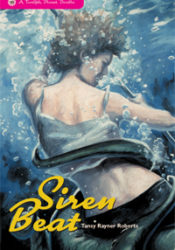 Roadkill is a squeamishly uncomfortable story with the kind of illicit weekend away that you never want to have. Roadkill offers a taste of the new full length collection by Robert Shearman, out in November 2009.

“Do you want some music?” he said at last, “would some music be nice?” He fished around for a wad of CDs with his spare hand. “I think some music would be nice,” he said, “I’ll see if I can find Elton John.” And then she didn’t so much hear it as feel it, there was a thud, and a quick streak of something very solid against the windscreen. “Jesus,” he said. He didn’t drop the CDs, she noted, he put them back safely into the glove compartment. “Jesus, what was that?”

You hit something, she thought.

Siren Beat follows detective Nancy Napoleon as she investigates strange happenings in Hobart. Siren Beat is a paranormal romance sans vampires or werewolves but featuring a very sexy sea pony. A minor group of man-eating sirens on the docks of Hobart would not normally pose much of a challenge for Nancy, but she is distracted by the reappearance of Nick Cadmus, the man she blames for her sister’s death.

Sirens and mermaids tend to be bitter. You can’t blame them, really. Their tales don’t tend to have happy endings. Still and all. That doesn’t give them the right to come to my city, to seduce its children and dump them in the river. It should never have happened, and it’s my bloody fault. But I can stop them. If the push-push-push of the beat they play doesn’t get to me first.

Roadkill by Rob Shearman is a horror story, but not in the conventional sense. This is not a horror story of monsters, teeth, claws in the night. This is a story which explores the horror of banality, the soul-killing terror of the unadorned human condition. Rob Shearman is an interesting writer, very much on the way up… it filled me with a bleak, shuddersome dread.

Anyone familiar with Roberts will recognize some of her favourite tropes: pretty clothes, prettier men, and the Right Shoes For The Occasion. And why not? It’s a story set in and around nightclubs, drawing on a classical myth of lethal sexuality and fatal attraction. Roberts’ enjoyment of the material serves only to strengthen the characterisation and give an all-important human dimension to the otherwise inexplicable and unhuman Guardians and their ilk… There’s plenty of action, a dose or two of hot, sweaty sex, a fillip of something like romance, and a good time to be had by all.

This is a very powerful piece, layered with complexity and depth. Roadkill breaks the stereotype of the urban fantasy genre, and delivers a story with gravity.

Siren Beat is all about kicking ass and teasing you with sensuality, make no mistake about that. What makes this piece unique is its length–other writers might need a novel to draw out their entire story but Roberts accomplish everything and much more in the span of a novelette.

… this is a very tempting book, and it’s not everyday that you witness a publisher risk their reputation on, of all things, a pair of novelettes (ha!). Depth and compression–these are the assets of the stories, and it doesn’t hurt that the book has a gimmicky but ingenious book design.