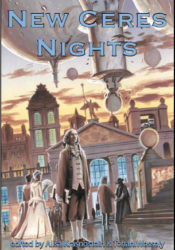 New Ceres, a planet in the outer colonies, embraced the Age of Enlightenment nearly two hundred years ago and refused to let go. Refugees and opportunists come to New Ceres in search of new lives, escaping the conflicts of the interstellar war that has already destroyed Earth.

The Australian-based shared world project New Ceres has produced an enjoyable anthology, New Ceres Nights, set on a planet with artificially restricted tech. The stories hint at (and sometimes show directly) some dark aspects of this future, though many are fairly light in tone. I particularly liked Tansy Rayner Roberts’s “Prosperine When It Sizzles”, featuring the very popular character La Duchesse and her assistant M. Pepin – about whom we learn some secrets as he meets an old offworld acquaintance while the two of them try to rescue a prominent politician’s children from some unfortunate choices in entertainment; and Sylvia Kelso’s “The Sharp Shooter”, in which the title character comes to a remote farm to help eliminate a dangerous beast.

While [the stories] share the same setting, each explores different aspects, and the result is a surprising variety…these were all strong offerings, and set in an inspired order, to gently introduce readers to the world’s quirks before they become important subtleties in later tales.

… marvel that a story set a thousand years in the future, at a remove of many light years from Earth, and seeking to recapture an era two or three centuries before our own, can hold up such a mirror to our own mode of existence.

Other New Ceres projects include Angel Rising and the New Ceres webzine.

New Ceres by Twelfth Planet Press is licensed under a Creative Commons Attribution-Noncommercial-Share Alike 2.5 Australia License
Based on a work at ceres.dreamhosters.com