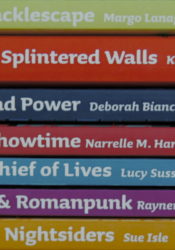 Who Are the Twelve Planets?

What Are the Twelve Planets?

The Twelve Planets are twelve boutique collections by some of Australia’s finest short story writers. Varied across genre and style, each collection offers four short stories and a unique glimpse into worlds fashioned by some of our favourite storytellers. Each author has taken the brief of 4 stories and up to 40 000 words in their own direction. Some are quartet suites of linked stories. Others are tasters of the range and style of the writer. Each release will bring something unexpected to our subscribers' mailboxes.

When Are the Twelve Planets

The Twelve Planets will spread over 2011 to 2014, with books released between February and November each year.

These collections, just four stories in a slim paperback, are an excellent idea, a tasting menu of Australasian female genre writers... These Australians give me hope for the future of female, and even feminist, writers in sf. - Gwyneth Jones

When I heard Twelfth Planet Press were planning to showcase women SF writers who deserve better recognition I was truly honoured and delighted to be a part of it. - Marianne de Pierres

Love and Romanpunk is a fantastic read and one I heartily recommend. It showcases the brilliantly talented Tansy Rayner Roberts whom every speculative fiction reader should be looking at, following up Nightsiders, volume one in Twelfth Planet Press’s Twelve Planets series, with another fantastic collection of stories by Australian female authors. - ASif!

How to Receive the Twelve Planets

The Twelve Planets are available for purchase in several ways:

$60 for the complete series, each ebook sent out on release.

Subscriptions can be bought at any time - the already released collections will be sent out on purchase. Upgrades to full subscriptions are also available. Email contact@twelfthplanetpress.com to organise subscription upgrades.

Please include your correct email address to receive your ebooks in the instructions to the vendor if this is not the address used to purchase online.

Single collections in paperback are priced at $20/$23 International each including postage and in ebook for $5.95 each:

Thief of Lives by Lucy Sussex

Through Splintered Walls by Kaaron Warren

The Female Factory by Angela Slatter and Lisa Hannett

Offers the three paperback collections of the season for $50/$65 International including postage and each sent out on release.

$180/$215 International including postage and each sent out on release. (SOLD OUT)