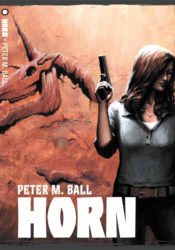 Horn is a perfectly delightful book about a private eye named Miriam Aster tracking down a fairly nasty murderer… or it would be, if Aster wasn’t the reanimated lover of an exiled Faerie Queen, and the murderer wasn’t a sex-crazed unicorn starring in a particularly repugnant snuff movie with an underaged runaway.

There’s a dead girl in a dumpster and a unicorn on the loose – and no-one knows how bad that combination can get better than Miriam Aster.