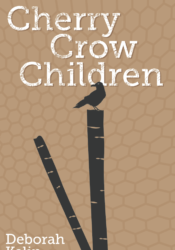 Tulliæn spans a fractured mountaintop, where the locals lie and the tourists come to die. Try the honey.

Briskwater crouches deep in the shadow of a dam wall. Ignore the weight of the water hanging overhead, and the little dead girl wandering the streets. Off with you, while you still can.

In Haverny Wood the birds drink blood, the dogs trade their coughings for corpses, the lost children carve up their bodies to run with the crows, and the townsfolk stitch silence into their spleens. You mustn't talk so wild.

The desert-locked outpost of Boundary boasts the famed manufacturers of flawless timepieces; those who would learn the trade must offer up their eyes as starting materials. Look to your pride: it will eat you alive.

Sooner or later, in every community, fate demands its dues — and the currency is blood.

Deborah Kalin is an Australian author based in Melbourne. A student of Clarion South 2005, she is the author of the Binding books (Shadow Queen and Shadow Bound, published by Allen and Unwin), and her short fiction has appeared in Postscripts Magazine and ASIM. An original voice of Australian fiction, her work has been described as “striking, infuriating, endlessly surprising and wonderfully disturbing” (Aurealis).

"From the coiling stairs and malevolent causeways of Tulliæn to the stark and blood-hungry wilderness of Haverny Wood, Kalin imbues her worlds with such purpose, each tale rich with detail and filled with intent and life, that each setting is a character in itself." - Aurealis

"Deborah Kalin is both a series writer and a serious talent... storytelling like a force of nature ...The result can be alluring, foreboding, unexpected or gruesome, at times achingly tragic, but always faithfully enacted. Kalin's fantasy settings carry a truth that most real-world fiction fails even to aspire to, let alone attain." - Jacob Edwards, ASIM

Sooner or later, in every community, fate demands its dues — and the currency is blood. The Twelve Planets series concludes with Deborah Kalin's collection.