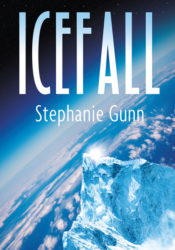 The Mountain on the planet of Icefall holds the mystery to a lost colony and an irresistible, fatal allure to the climbers of the universe. Maggie is determined to be the first to make the summit. Aisha, injured in a climbing incident herself, has always supported her wife, trusting Maggie would always return from her adventures. But no one ever returns from the Mountain.

“a story that at times hews as close to horror as it does to science fiction… It’s a fascinating story, and a compelling one” Liz Bourke, Tor.com

★★★★ “an eerie and evocative read… I was not ready for it to end, and would love to return to the world of Icefall to see what happens when the Mountains weep once again.” Shelley Russell Nolan, Aussie Speculative Fiction

★★★★ “This fast paced novella has everything a sci-fi fan could wish for.” Daniel Stubbings, The Dimension Between Worlds

“I loved this novella.” Alexandra Pierce

“I’ve read some fantastic books this year. Icefall is up there with the best of them. It blends hard science fiction with spirituality, then packs the cast full of diverse women and puts some compelling relationships at the heart of it all.” Elizabeth Grey, Earl Grey Editing

★★★★★ “It's been a while since I read a book with this much focus. I loved how palpable Aisha's devotion is, to an almost otherworldly Maggie - and the Mountain felt somehow viscerally present at all times - like a haunting.” Rick Mavrick

Stephanie Gunn has had stories published in anthologies such as Kisses by Clockwork, Bloodstones (Ticonderoga Press) and Epilogue (Fablecroft). Her story "Escapement", was nominated for a Ditmar and Tin Duck Award. "To Take into the Air My Quiet Breath", her story in Defying Doomsday (Twelfth Planet Press) won the Tin Duck in 2017 for best short fiction. She has also been Ditmar nominated for fan writing and won a Tin Duck for the same.  Stephanie has judged the Aurealis Awards, convening panels for several years.