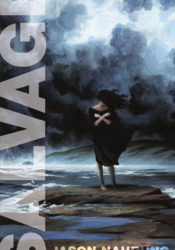 Seeking to salvage their foundering marriage, Melanie and Richard retreat to an isolated beach house on a remote Queensland island.

Intrigued by a chance encounter with a stranger, Melanie begins to drift away from her husband and towards Helena, only to discover that Helena has her own demons, ageless and steeped in blood.

As Richard’s world and Helena’s collide, Melanie must choose which future she wants, before the dark tide pulls her under … forever.

"Nahrung's novella is an atmospheric and taut slice of Aussie vampire gothic..." - The Herald Sun

"While the book touches on the vampire theme, readers should not expect anything like the current romantic horror sagas of late in popular culture ... Salvage is moodier and the romance more understated." - Sunshine Coast Daily

"a dark thriller full of suspense – well-paced, old-fashioned horror at its best" - The Courier-Mail

Seeking to salvage her foundering marriage in an isolated beach house, Melanie must choose which future she wants, before the dark tide pulls her under … forever.