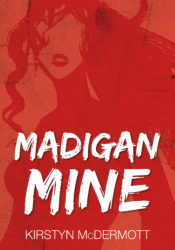 When Alex meets Madigan again everything changes. His childhood sweetheart is beautiful and impulsive, but there is something wrong with her. Something dangerous.

Then she commits suicide.

Now Alex can’t get Madigan out of his head. Is it all in his mind, or is she communicating with him?

To save himself and those he loves, Alex must uncover the sinister reason why Madigan took her own life – and why she won’t lie still in her grave.

Madigan Mine is Kirstyn McDermott’s debut novel, first published in print in 2010.

Reviews of Madigan Mine

‘McDermott’s characters are psychologically complex and precisely observed … It’s a well-crafted debut, with an imaginative twist, that horror fans won’t be able to put down.’ - Cameron Woodhead, The Age

‘This is a masterful debut novel by Kirstyn McDermott, written in crisp, clear prose that captures the possessive relationship of the easy-going Lexi and the strangely beguiling Madigan in a chilling and yet, for a supernatural narrative, oh so real way.’ - Karen Brooks, author of Tallow, Votive and Illumination

‘McDermott’s writing is rich, each word seems deliberately evocative, conjuring up a tangible reality. It’s writing that demands to be noticed, that demands control over your imagination.’ - Sean Wright, Adventures of a Bookonaut

When Alex meets Madigan again everything changes. His childhood sweetheart is beautiful and impulsive, but there is something wrong with her. Something dangerous.