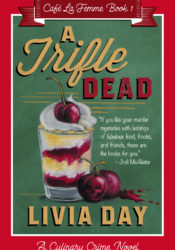 Available in paperback and ebook and as a paperback/ebook bundle

When a dead muso is found in the flat upstairs, Tabitha does her best (honestly) not to interfere with the investigation, despite the cute Scottish blogger who keeps angling for her help. Her superpower is gossip, not solving murder mysteries, and those are totally not the same thing, right?

But as that strange death turns into a string of random crimes across the city of Hobart, Tabitha can’t shake the unsettling feeling that maybe, for once, it really is ALL ABOUT HER.

Livia Day is a stylish, murder-obsessed fashionista who lives inside the head of someone else entirely. Tansy Rayner Roberts is a mother, an author, a blogger, a podcaster, and a Hugo-award winning critic. Together they WRITE CRIME. And sometimes they invent ice cream recipes. Livia Day is the author of the Café La Femme series of cozy mystery novels, including A Trifle Dead, Drowned Vanilla, The Blackmail Blend and available for preorder, Keep Calm and Kill the Chef. Warning: reading these books will make you crave dessert.

"A Trifle Dead is a light, funny and enjoyable read blending mystery, humour and a touch of romance. Oh and there are delicious recipes on the final few pages, ideal for an aspiring foodie or any reader with a sweet tooth. I am looking forward to the next installment." - Book'd Out

Read a sample from A Trifle Dead

You can tell a lot about a person from their coffee order. I play a game with the girls who work in my café—guess the order before the customer opens their mouth. It’s fun because half the time you’re spot on—the bloke who would rather die than add anything to his long black, the girl who doesn’t want to admit how weak she likes her latté, the woman who’ll deliberate for twenty minutes as to whether or not she wants a piece of cake (she does), the mocha freak, the decaf junkie.

The rest of the time, you’re completely wrong. An old age pensioner requests a soy macchiato, a gang of pink- haired school girls want serious espresso shots, a lawyer in a designer suit stops to chat for half an hour about free trade… The best thing about people is how often they surprise you.

Ever wondered what kind of coffee a murderer drinks? Yeah, me neither.

I tumbled into the kitchen of Café La Femme, arms full of bakery boxes, a vintage mint-green sundress swirling around my knees. Late as usual, but at least I was wearing my favourite sandals.

A gal can cope with anything when her shoes match her bra.

Nin paused in the middle of kneading focaccia dough to stare at me from under her expressive eyebrows. I love her eyebrows. They make Frida Kahlo’s look meek. ‘They’re here again,’ she said, and went back to kneading.

My assistant cook doesn’t use paragraphs when a sentence will do, so I had to read between the lines. ‘They’ almost certainly referred to several respected members of the Hobart police force, most of them in uniform, some of them armed. ‘Here’ meant all the comfortable chairs in the main room of the café, and probably leaning on the counter as well. ‘Again’ meant that Nin was sick to death of them all asking her where I was, and how I was doing, and I probably owed her a raise.

I couldn’t afford to give her a raise, so I piled my boxes of bread rolls, bagels and croissants on the bench and tied on my Barbarella apron instead. ‘Can I help you with that dough?’

‘Okay, okay. I just have to bring in the eggs, and then I’ll go front of house. Five minutes.’

I ducked outside and took several breaths of salty spring air before she could object. Five minutes, and I could just about deal with a café full of guns and bicycle clips. Couldn’t I? The café courtyard is a gravel square, walled in by sand- stone blocks that were once shaped by convict hands. I keep saying I’ll clean it up and put tables out here, but the truth is I don’t want to lose my little sanctuary of calm.

Our local egg supplier had left a basket by the back step. I’d asked her more than once to take them straight into the kitchen so no one will trip over them, but she claims to be afraid of Nin’s eyebrows. Who can blame her?

As I leaned down to pick up the basket, I caught a whiff of strawberry perfume, and then someone came up behind me and yanked my braid. I reacted with a lifetime of skipped self-defence classes by screaming like a girl, and slamming the basket of eggs behind me and into the face of my assailant.

‘What the—!’ she exclaimed in disgust, and let go of my hair.

Read the rest of this chapter here.