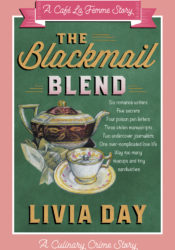 Set between A Trifle Dead and Drowned Vanilla

From our crime imprint, Deadlines, e-book only

Cake, not murder. Cake hardly ever gets you killed...

Tabitha can quit solving murder mysteries any time she likes - and right now, she's far more interested in her catering job for Queen Beattie's high tea. Beatrice Wilde is a famous and beloved romance novelist, who nurtures new writers with tea, sympathy and career advice. She's also obnoxious, demanding, and a hot contender for 'Client Most Likely To Be Murdered By Cake Fork.'

Queen Beattie's high tea sets off a murderous chain of events involving poison, blackmail, revenge ... and a special blend of mayhem. Once again, Tabitha is right in the centre of the chaos, and the only way out is to solve the crime - even if that means losing one of the very confusing and attractive men in her life.

Way too many teacups and tiny sandwiches...

The Blackmail Blend is a Cafe La Femme mini mystery set between A Trifle Dead and Drowned Vanilla.

"If you like your murder mysteries with lashings of fabulous food, frocks, and friends, these are the books for you."-- Jodi McAlister

AUTHOR BIOGRAPHY: Livia Day is a stylish, murder-obsessed fashionista who lives inside the head of someone else entirely. Tansy Rayner Roberts is a mother, an author, a blogger, a podcaster, and a Hugo-award winning critic. Together they WRITE CRIME. And sometimes they invent ice cream recipes. Livia Day is the author of the Café La Femme series of cozy mystery novels, including A Trifle Dead, Drowned Vanilla, The Blackmail Blend and available for preorder, Keep Calm and Kill the Chef. Warning: reading these books will make you crave dessert.

Enjoy an excerpt from The Blackmail Blend

Stewart looked as if he was going to say something else, but at that moment, Xanthippe emerged from the kitchen. ‘Tish,’ she said to me, and rolled her eyes at Stewart as he gave her Regency Rake costume an ironic wolf whistle. ‘Oh very twenty-first century male, that is, I swoon in your general direction. Tish, there’s a problem with Queen Beatie.’

I hurried over to her. ‘Is she offended by something else? Did she find out about the Duchess of Bedford? Is the tea too cold? Too hot? Are the sandwiches the wrong shape? Did she make more people cry?’ Stewart and I exchanged a brief glance, and the question ‘Did she find out there’s a conspiracy to blackmail her over tea and cakes’ rose to my tongue, but did not emerge.

‘No, none of those things,’ Xanthippe said impatiently.

I eyed her suspiciously. ‘Then what’s she in a strop about?’

A light went off in Xanthippe’s eyes as if she had spotted the perfect way to present me with bad news as if it was good news. ‘Oh, she’s definitely not in a strop. This is a strop-free situation.’

‘And the ambulance will be here any minute.’

The courtyard swam around me, and then snapped into focus. ‘Ambulance, like … actually what?’

‘It’s all going to be fine,’ said Xanthippe. ‘Though when I say fine, she is in fact not very fine at the moment. Still breathing, though, so there’s that.’

I opened and shut my mouth and nothing came out. ‘Did someone stab her with a cake fork? I hid the cake forks to avoid that very specific situation!’

‘No, I reckon she was poisoned.’

Stewart was standing right behind me, and I felt him take my hand.

‘What kind of poison?’ I said in a small voice. ‘Not—allergies? She’s allergic to a lot of things. There was a list.’ Had I missed something? Was this my fault? ‘Is she going to be okay?’

I could hear them now, the ambulance sirens, getting closer.

Stewart guided me into the kitchen, where I could sit down. Poison. Thoughts of my café’s reputation flooded through my brain. Poison was bad. Hard to come back from poison. ‘You don’t mean food poisoning?’ I said in an even smaller voice. Salmonella in the quiches. Egg white in the chocolate mousse. This could be the end of Café La Femme.

‘To be honest,’ said Xanthippe. ‘I’m pretty sure it was attempted murder.’

‘Oh, thank goodness,’ I said, and then realised a beat later that it was the wrong thing to say.

This shouldn't be a recipe for mayhem and murder, but Tabitha Darling has been burned once before and she knows the signs that she's about to fall into another crime scene. At least she doesn't have to worry about love triangles any more. Right? RIGHT?