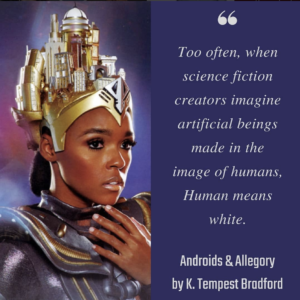 K. Tempest Bradford writes in “Androids and Allegory” about the work of Janelle Monae and Chesya Burke, comparing how these two Black women conceive of and depict androids, how they play with the idea of the android as Other, and how their speculative visions are different from the majority of white SF creators that came before them.

You can read her essay here.